The @KitchenAidUSA Crisis and 4 Ways it Could Have Been Avoided

By now, the uproar caused by the #SocialMediaCrisis behind KitchenAid’s accidental tweet has somewhat ceased and people have gone back to looking for a new, juicy story to dramatize. But the important question remains: Did we learn our lesson? 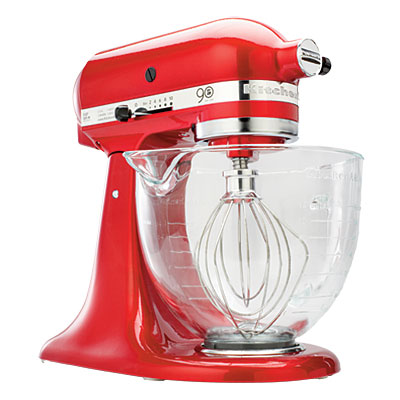 In case you somehow slept through the last 5 days of painful backlash that KitchenAid endured, it was caused by a tweet sent out from the Brand’s Twitter Channel during the Presidential Debate last week:

”Obamas gma even knew it was going 2 b bad! ‘She died 3 days b4 he came president’. #nbcpolitics”

Obama had mentioned his grandmother, Madelyn Lee Payne Dunham, during the debate. She died November 2, 2008, just before Obama was elected president.

During the first 24 hours of the crisis, KitchenAid did the best they could have in an attempt to put out the fire and they did a good job.

1. KitchenAid deleted the tweet first. Naturally, there is no reason to leave these harsh words present after the brand was about to get completely torn apart as it was. That is an understandable action.

2. Then, they issued an apology on Twitter – completely and utterly necessary. “Deepest apologies for an irresponsible tweet that is in no way a representation of the brand’s opinion.  #nbcpolitics” the tweet read.

3. Next, after Mashable had already been hard at work (doing their job…) reporting about the incident, the marketing women who is in charge of @KitchenAidUSA’s Twitter account, Cynthia Soledad, delivered a message herself through the channel.

[Jonathan Rick reported for Fast Company:] Soledad reiterated the company’s contrition, and made it specific (we are “deeply sorry to President, his family, and the Twitter community”). She condemned the tweet as “tasteless,” and again took full responsibility (“I take responsibility for the whole team”). And she implemented corrective action, promising that the jokester “won’t be tweeting for us anymore.”

She also wrote a [later publicized] email to Mashable, explaining the details of the error. But, what are most important words Soledad said throughout this situation? 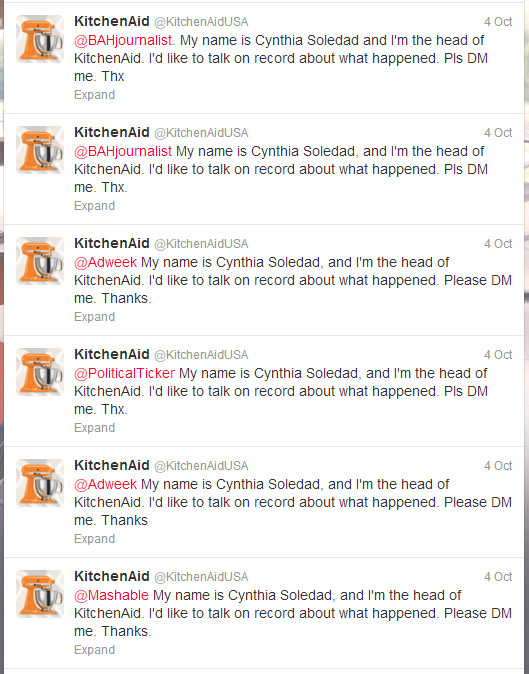 4. Soledad started reaching out to Big Social Media influencers, offering to speak with them about the incident, publicly. Keywords there: “On record”“My name is Cynthia Soledad, and I’m the head of KitchenAid. I’d like to talk on record about what happened. Pls DM me. Thx.”

The end… until next crisis.

But wait, how could this have been avoided?

Mistakes happen. Crisis in inevitable. Social Media provides the public an open, global forum. It is an amazing step forward in evolution, but to say that Risk is a side effect is a major understatement. We cannot stop the inevitable; but we can try. Here’s how:

1. Plan for the worst: Do you need to hear it again? We’ve been hearing it since third grade, when our teachers issued planners and taught us how to balance a checkbook. Planning is critical. And if you don’t plan for the worst, than how will you know how to handle it? In Social Media, we must create a Crisis Plan. (We will talk more about this soon.)

2. Policy, Policy, Policy: Not only must these things be planned, they must be recorded. KitchenAid (and and business) should know exactly what to do in a crisis situation without missing a beat. Because when it comes to Social Media, time is of the essence. If your company has a Social Media Policy, (which they better!) then make sure it is actually informative. Tell people what to do in the case of a crisis. How soon do you react? Do you deal with it yourself, or turn it over to a higher-up? What response do you conjure up?

(Our advice: Say Sorry – whatever your Brand did, they are in the wrong, the public is right. However rude and insensitive your audience may be at the time of a crisis, they are your only hope and your biggest advocates.)

3. Don’t let careless people manage your Business social media accounts. You do not take the role of ‘community manager’ seriously enough when you hire college interns and tell them to ‘start tweeting’ immediately on your business account. Train your community manager. Make them read and SIGN your social media policy, and know they understand the consequences associated with a crisis, AND what will happen to them if they are the cause.

4. Lastly and very simply, don’t be careless. If you’re going to tweet outrageous and seemingly funny outbursts on your personal Twitter accounts often, fine, but do not have the auto-login set up for both your personal and professional account on your phone, where your fat little fingers can magically log into the account representing an Entire Global Brand with the press of one button. Oh, and if you have access like that, double check to make sure you’re logged into YOUR OWN ACCOUNT before ruthlessly making a jab at the President (or anyone).

Tweet on your personal account from one device and your business account from another. Set up barriers. Sure, we’ve all made mistakes on our social media accounts (that awkward moment when you’re Facebook stalking someone and accidentally type her name in your status update rather than the search box..). Keep Business and Personal SEPARATE. Make rules for yourself as a community manager, knowing the risk of a potentially destructive error.

What would you have done in KitchenAid’s position?