Does your company do business across the globe? Digital business training for global organizations on how to properly use International social platforms is no longer an option, it is a demand. These social networks are critical for communicating and spreading messages to a cross cultural audience. The most recent rising star in global, social business seems to be Sina Weibo out of China, which is China’s version of Twitter. The Chinese social platform has been all the talk lately. Listen to what is being said..

1. Sina Weibo now has an English language option for its user interface.

This is huge. Making the site more accessible to international users is definitely going to help the social network further build on its whopping 400 million users. (According to TechCrunch, in July 2012, Twitter was at 500 million+ but only had about 170 million active users.)

Of course following English integration, the hope is that English Advertisements will be the next step. “Sina Weibo currently generates revenue with Chinese adverts from various brands as well as through a Premium option, but throwing English commercials into the mix should help to bring in additional income,” According to Ben Kersey, of the Verge.

A Sina Weibo representative in Beijing said, “Countries in Southeast Asia can pick English or Chinese – this isn’t opened globally yet.” But it appears that many people here in the US have already had success in choosing the English option. With its recent redesign, supposedly a simpler one, the Weibo.com front page now has an “English” option in the drop-down menu, though it doesn’t convert the whole page from Chinese. Then, once logged in, Sina Weibo has some English in the menus, but the entire interface is far from translated. It is certainly a first step though.

The Chinese Social Network has officially launched promoted feed advertising. It is another attempt by the creators of Sina Weibo to convert the microblogging platform into a moneymaker, according to Chinese news website Sohu IT. The new system was in closed testing last year and is now rolling out to all users. Somewhat similar to the recent ‘promoted tweets’ on Twitter, ads are set apart from user posts with a grey line and a notice that it is a sponsored post.

Interestingly, promoted posts have yet to arrive on mobile, which is strange given that Sina Weibo recently committed to a “mobile first” strategy. CEO of Sina Weibo, Charles Chao, informed employees of the company last year that they would be making both ‘mobile and monetization’ priorities for the company. 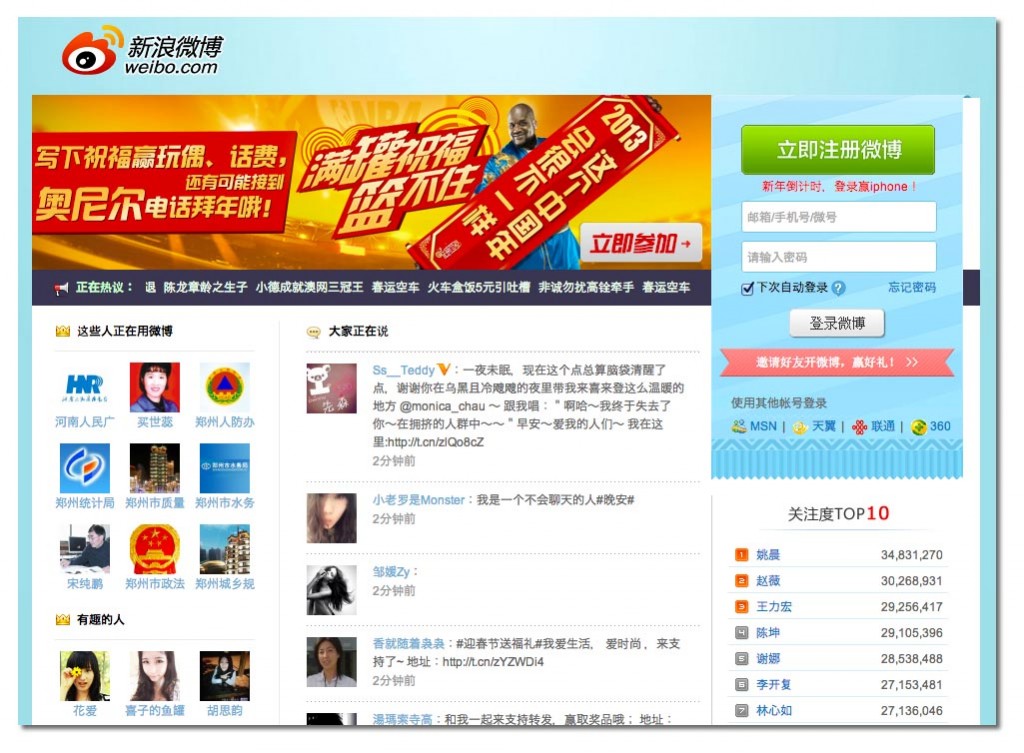 After Sina Weibo started deleting posts and entire accounts related to a controversial editorial known as the “Southern Weekly’s New Year Greeting incident,” outraged micro-bloggers took the route of verbally attacking managers of the site. Apparently, all related keywords and even terms like “the South” (南方), the first term in the newspaper’s title, became unsearchable topics.

Upset with all the pressure that the Propoganda Department was imposing on him and his colleagues, Sina Weibo’s manager, @geniune_Yu_Yang（正版于洋）responded to the outrage by writing an inside story to explain their difficult position. Within his translated post were these words:

We need [Sina] Weibo to deliver voices. But a hand is manipulating behind us. Someone is doomed to be sacrifice in this game. We live in a country full of special and sensitive barriers and we have to operate within a set of rules.

The way we receive orders is similar to the way the Catholic Father in the movie Cinema Paradiso rings his hand bell whenever there is a kissing scene. We have to take orders whenever we hear the ringing bell.”

It’s somewhat of a culture shock to see a country’s popular social media site practicing such extreme censorship after when we easily take for granted the freedoms we associate with our social platforms. It still doesn’t stop Sina Weibo users from crying out, but some of them have had to learn the hard way to respect the rules.

4. Sina Weibo users ring in the New Year with record 729,571 messages per minute.

This new record may not last long since February is when the Chinese New Year is celebrated and that will likely create a new record. By comparison to that number, Twitter witnessed a record of 327,000 tweets per minute when President Barack Obama was re-elected, showing how many of Sina Weibo’s users are more active.

Sina Weibo has big plans for the new year to make a focus on combatting competition and becoming a more profitable company. Recent government regulations could certainly dampen usage of the social platform.  Although, China’s National People’s Congress has approved such regulations as real-name registration  that could potentially affect all Internet services in the country, not only the Twitter-like network. It will be interesting to continue to watch the progression (or decline) that these global social platforms will see. In the meantime, we must stay constantly educated in order to better serve our global brands.