After what appears from the fan’s perspective to be a horrifying incident, NASCAR took what many consider a cowardice approach to the situation at hand. The entire incident  illustrates the need for training and “Fire Drills” for the entire sport, and all teams alike. 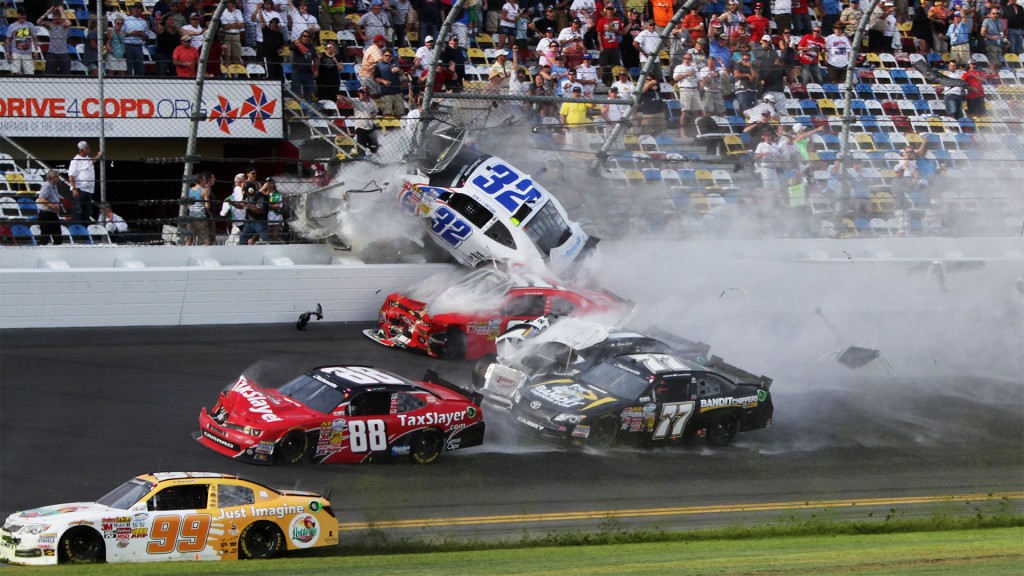 The first fail that took place with NASCAR was for them to quietly ‘hide’ from the matter rather than facing their fans.

As Mashable reported:  When a multi-car accident punctuated the end of a NASCAR race at Daytona on Saturday afternoon, fan-shot footage of the disintegrating cars, pieces of debris flying into the stands, and a tire landing between the bleacher seats quickly found its way to YouTube. Minutes later, the clip was removed by YouTube at the request of NASCAR, citing copyright concerns.

Should the company faced with the matter immediately release statement on the matter? Absolutely. What should any company do in a crisis? Apologize. No matter who is at fault, corporations will take the blame.

Here’s NASCAR’s position on the matter: The fan video of the wreck on the final lap of today’s NASCAR Nationwide Series race was blocked on YouTube out of respect for those injured in today’s accident. Information on the status of those fans was unclear and the decision was made to err on the side of caution with this very serious incident.—Steve Phelps, NASCAR Senior Vice President and Chief Marketing Officer.

After the video started showing up on other video-sharing sites and almost as quickly as it was removed, it was back on YouTube. A YouTube spokesperson made the following announcement when it reappeared:

Our partners and users do not have the right to take down videos from YouTube unless they contain content which is copyright infringing, which is why we have reinstated the videos.

When one Tweeter commented on Glen Gilmore’s tweet about the Mashable article asking “Why share this with the word?” Gilmore’s response: “Should we not confront the stark reality of it – w/ an understanding only such a terrible clip shows?” Numerous people are taking a similar standpoint.

That statement was called by a Washington Post article, “a nicely spun corporate statement.” And furthermore the article stated, “When asked about NASCAR’s policies vis-a-vis YouTube and its approach to fan videos, Matt Humphrey, NASCAR’s manager, content communications, declined to comment, postponing such a discussion until “a more appropriate time.””

If NASCAR had appropriate crisis training, they would already have a response to this very issue. This was not a rare incident to occur at the scene of a racecar speedway. This is something that could have been faced before it happened. In fact, a common type of Social Crisis Training involves simulation of an actual crisis and the appropriate response to the crisis can then be worked out in ‘closed door’ environment where key players have the chance to spend time creating the correct solution. Had that been the case, there would be no need to discuss the incident at “a more appropriate time.”

Here is the video that caused the crisis:

How Marketers and Influencers can use Instagram’s Close Friends feature to their advantage.
0
4731