According to a study conducted by Altimeter Group’s Jeremiah Owyang & Rebecca Lieb, the average person is exposed to some 3000 marketing messages per day originating from traditional media, social media, advertising or a combination of all three. Today’s challenge for brands is to cut through this media clutter to deliver the right message to the right people. Companies are at a severe disadvantage should they not align all marketing channels, as they are not only beginning to converge; soon they will be inexplicably entwined. And here’s why..

Before laying out the importance of integration of all three marketing channels, Converged Media, it is important to firstly grasp its makeup.

Paid – Often considered ‘traditional advertising’, is the leveraging of 3rd party channels such as sponsorship, paid search marketing and advertising to transmit your brand’s messaging. Additionally, more often than not, it is targeted towards general consumers with the aim to create brand awareness and customer acquisition.

Owned – Organically delivering your brand’s messaging via a company’s owned media such as your website, blog, social channels and even email newsletters. These initiatives are delivered with your existing community and customers in mind.

Earned – Can essentially be described as Word Of Mouth. It is the natural result of public relations’ efforts, ad campaigns, events and content from owned media channels. That which you have no control over, this is an integral marketing channel in building brand advocacy, awareness and reputation. 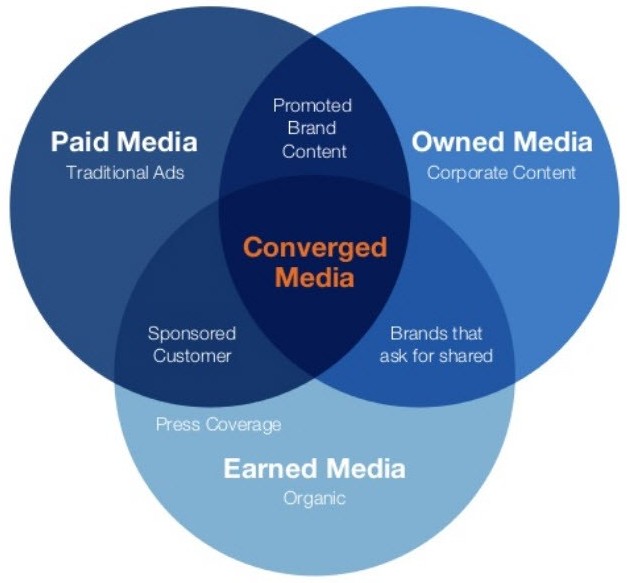 Altimeter Group argues that advertising no longer works as effectively unless bolstered by additional marketing channels. Converged Medias work in concert to cost-effectively bolster a brand’s overall marketing strategy. Look at the recent release of Will Ferrell’s Anchorman 2 and how they utilized its owned image of Ron Burgundy to leverage maximum exposure of both its paid and earned media channels. Although its financial effectiveness is debatable, it successfully raised awareness about the upcoming release of the film while providing value and a source of consumer conversation.

With a surplus of content in a today’s market where consumers have a strong attention deficit, it is more and more difficult to organically grab the attention of the right consumer with the right message, when they are being bombarded by your noisy competitors – this is why converged media is important to your content strategy. A recent study showed that 79% of us now trust an online review just as much as a personal recommendation. By leveraging earned media’s convergence with owned media initiatives, savvy companies are taking advantage by letting brand advocates help to tell their story while helping consumers alter their preferences in a positive way.

Generally, owned media alone cannot always scale itself effectively. An example of this is that of a company’s Facebook update; considering you organically reach 8-10% of your audience, sponsoring that update will show it to both the majority of your fan base and those who you have chosen to target as well. Without paid media, it is difficult to reach the mass market. That said, ironically, it is almost impossible to effectively place your entire initiative’s weight on the shoulders of paid media alone. Customers are savvier as they are learning to tune out advertising and your brand’s messaging.

According to Altimeter Group, “Converged Media will happen and is happening; if marketers do not take action, the effectiveness of marketing efforts will suffer.”

How Marketers and Influencers can use Instagram’s Close Friends feature to their advantage.
0
4768