Gold, silver and bronze were handed out a plenty over the two week duration of the winter Olympics in Sochi, however the biggest winners, one could argue, were found on social media. Widespread hoaxes of wolves, gold medals made of bacon, and one stunt alarming the attention of the SWAT team in texas were just a handful of noticeable digital happenings in this year’s Olympic highlights.

Japanese figure skater, Mao Asada, took gold for the most mentioned athlete of the games after her tearful end to her Olympic career, however the real winner on social was TJ Oshie, who garnered over 130,000 twitter followers within an hour after his 4 goal shoot-out performance helping USA defeat Russia in the Ice hockey event. 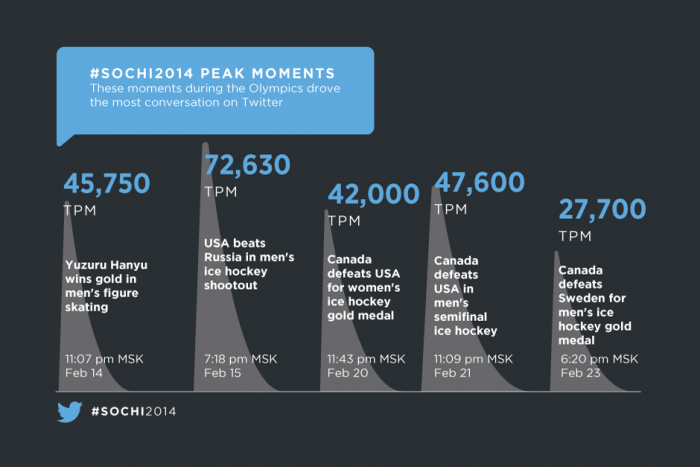 That exact moment, at 7:18 PM (Moscow Standard Time) was, in fact, the most tweeted moment of the entire games as the world expressed their rejoice and disappointment at an average of 72,630 tweets per minute. The only two other sports coming close to topping Hockey’s social media dominance was Curling and Figure Skating, however this again was trounced a week after as the public flocked to twitter once again as Canada defeated USA a week later in the men’s ice hockey semifinals at 47,600 tweets per minute.

A moment, which was heard as far as the SWAT team in Denton, Texas, occurred when Johnny Quinn broke through a locked door which closed behind him in his hotel. This unique situation caught wind on social attracting more than 29,000 retweets and the start of a newly formed internet meme.

…With no phone to call for help, I used my bobsled push training to break out. #SochiJailBreak pic.twitter.com/apZRefgvCO

We Liked It. They Should Have Put A Ring On It

A particularly appealing ad which caught wind, however turned out to be fake, could have hit Sochi 2014 just as Oreo hit the 2013 SuperBowl. [PIC] A Mashable article has since confirmed this to be fake, alas, as this real-time marketing moment could easily shook the Twittersphere.

If London was dubbed the Twitter Olympics, Sochi 2014 could well be referred to as the viral games. The IOC strict social media regulations have been a subject of much controversy after Greek athlete Voula Papachristou was sent home from London two years ago after expressing her harsh right wing views as well as commenting on African immigrants. Athletes this year, however, obviously learned their lesson, even though American Luger, Kate Hansen, caused a stir with her wolf prank pulled with Jimmy Kimmel.

As the games came to a close, once again computer and mobile screens lit up the world with rejoicing and quality content on Twitter. Although not garnering as much attention as the opening ceremony, mentions of the #ClosingCeremony peaked at 14,447 tweets per hour during the event.

To cap off the amazing two weeks, the much anticipated conversation driver was when the Russian Olympics Committee eluded to their embarrassing opening ceremony blunder with a grain of salt. To this, we wish to say well done, or Молодцы, to the ceremony’s organizers, Молодцы indeed.