Round II: Lessons to be Learned about Corporate Cross-Cultural Social Networking 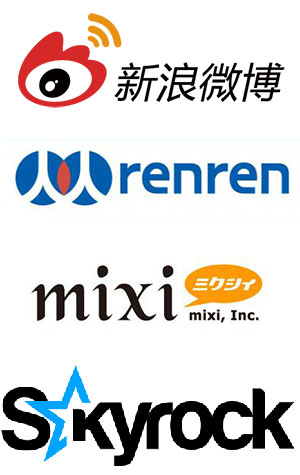 With Facebook’s 900 Million plus users worldwide, it’s easy to forget that not everyone on the globe spends their days navigating the rather ‘Americanized’ platform. In fact, that’s a small number of people when it comes to the Big Picture. Effectively spreading a message to a mass group of people is difficult; it’s important that a company is represented in a uniform standard across all ethnic backgrounds and their native Social Media Channels (For example, think about: RenRen and Weibo in China, Mixi in Japan and SkyRock in France). A huge challenge for corporations with Global Teams is the ability to build relationships and trust while understanding cultural differences. It is important that a company’s message is understood properly, translated correctly to the
necessary language and on the best social platform.

Chris McGrath of ThoughtFarmer wrote Five lessons learned about cross-cultural social networking, after gaining experience helping an Asian-based company with offices in Canada, the U.S., Korea and Japan deploy a global ‘ThoughtFarmer intranet.’ The first piece of advice he offered was about look and feel. “They enjoyed more muted pastel colors and anime-style emoticons, a look that seemed equally foreign to North American eyes,” he stated in the article.

Another visual element they struggled with is the use of real photos.

Chris McGrath wrote:
Sometimes cultural differences are intractable – but that doesn’t mean fatal. For example, Korean and Japanese users were uncomfortable with posting pictures of themselves at their personal intranet pages, preferring to use avatars or pictures of pets. They could not state definite reasons for this preference. Expectations around privacy, perhaps, or a culturally-ingrained sense of personal modesty?

Some North American organizations require employees to post pictures as a way to promote cohesion by making even remote fellow employees seem more familiar and accessible. But the disinclination of the company’s Korean and Japanese employees to do this appeared deep rooted and it was decided not to press the issue.

The visual aspects stand out most at first glance. The next barrier to overcome once people are comfortable with their visual surroundings is language. A challenge far more complicated than simply passing words through a translator.

Chris McGrath said:
We always use professional translators for translating program labels, tags and instructions into a new language. But we’ve found that professional translation on its own isn’t sufficient — only field testing with native speakers can verify accuracy. And minor mis-translations can have disproportionate effects.

For example, when ThoughtFarmer translated the program to Korean, it used a literal equivalent of the term “favorites”. But Koreans and Japanese use the term ‘scrap’ or ‘scrapping’ when they bookmark a web page – not a translation but the English words. ‘Favorites’ meant little or nothing to them. Result: many didn’t realize the feature was available so didn’t use it.

As stated in the previous article: The key to starting out your cross-cultural social media campaign is Research. A company’s marketing team must evaluate details that they may have no prior experience with. Before we help any business with social campaigns, we go through a Discovery phase. This is an essential part of the process to understand what our clients need in order to create customized solutions for them. Next we start the Development process. The first two are the most important pieces of the puzzle and help us to gain critical knowledge about our audience and the message that must be spread. From there, we move onto Production, Validation and finally Implementation. As the saying goes, “He who fails to plan, plans to fail.”

How Marketers and Influencers can use Instagram’s Close Friends feature to their advantage.
0
4752