Breaking It Down: Our Prediction of Snapchat’s Future

Millennial media consumption, which may seem somewhat anomalous to the rest of us, are in the process of ripping the fabric of the traditional media establishment which will only become more pronounced in the coming future. There are a multitude of different digital approaches to millennial marketing, one of which, we have found to be turning today’s media on its head. Snapchat, the self-destructing form of escapism for teens, has immediately been labeled an inappropriate app used exclusively by teens – a sentiment echoed by WhatsApp founders. However let us try to explain our predictions as to the importance of Snapchat’s future.

Snapchat Has 50% of The Visual Market

Launched in September 2011, Snapchat founder Evan Spiegel has seen off offers aplenty, including the much coveraged $3B bid from Mark Zuckerberg. The father ephemeral content, snapchat adds up to 400 million snaps shared per day to the visual market, giving it somewhere in the rage of 50% of the internet’s entire photographic content market. Importantly, echoed by Gary Vaynerchuk, the app is dramatically altering the 90-9-1 ratio where 90% of the internet consume, 9% edit and 1% create original content. This app, is noticeably in the process of changing just that. 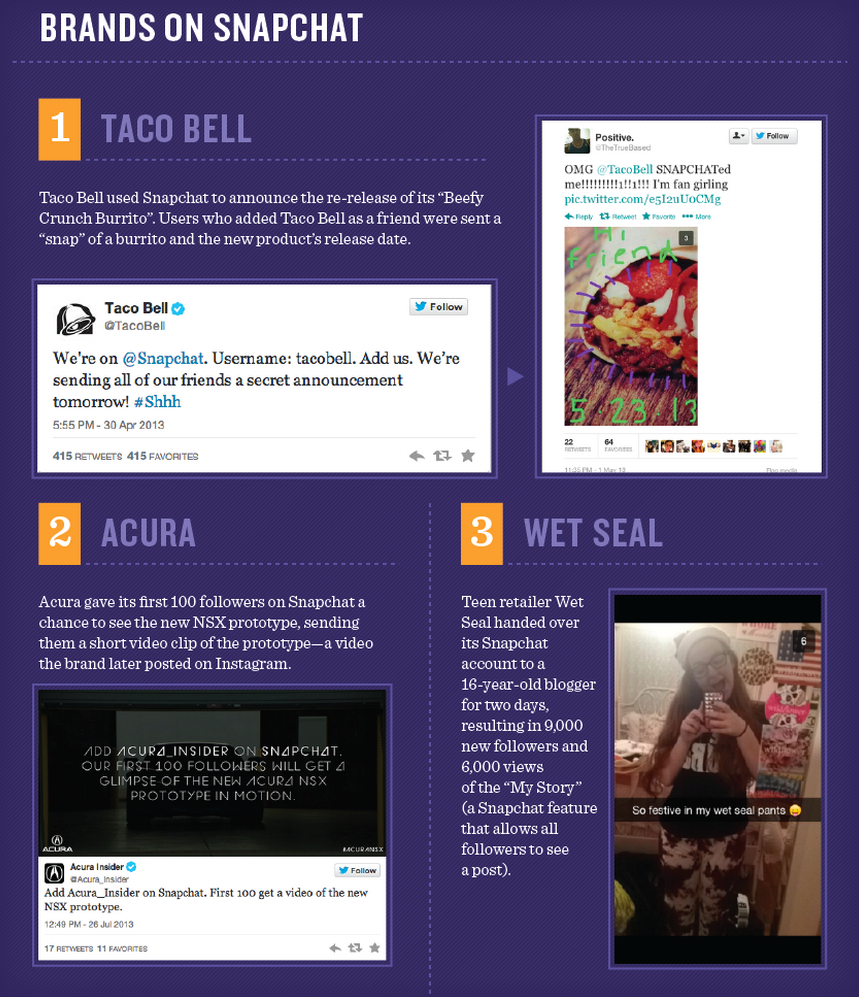 The debate surrounding where its exact value stems from, especially for brands, is much akin to those surrounding Facebook and Twitter not too long ago. After its massiv $16 Billion takeover, Whatsapp executives argued, “It’s not 100% clear to me whats working about snapchat […] People want chat histories. They’re a permanent testimony of a relationship.”

A plethora of brands, companies and organizations, however, have taken to the app to provide snippets of content for its entertainment-seeking customers and potential customers. Brands such as Taco Bell and Acura are receiving traction on their mission to be people’s source of ‘a quick media fix’ before carrying on their day. As it develops, a increasing amount of success stories surround Snapchat such as NastyGal who scrapped its traditional approach and announced its newest hire to the world!

Accounting for its 13-25 years old core audience and the fact 70% of its users are female, critics have obvious grounds for arguing its uselessness today. Millennial psychology, however, argues that content on Snapchat gains the most focused attention over any other platform, as knowing the content will disappear is incentive enough for consumers to make sure they don’t miss it. 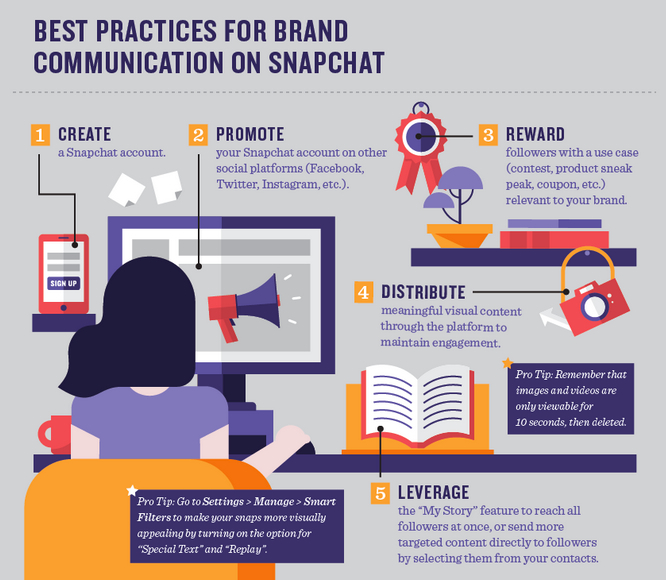 Just as Social Media has dramatically altered the speed of how we receive and access news, news websites such as Mashable & NowThisNews are riding this wave while adapting their creative digital strategies to include Snapchat in sharing their original content. Other brands such as food-ordering website GrubHub, which has plans to roll out its IPO worth $1 Billion, are gaining traction for providing daily offers to its Snapchat following using creating contest campaigns.

Ultimately this is another playground for brands to connect to their audience on the largest touch point between them and consumers. As the millennial market is said to be the most difficult demographic to create a relationship with, brands need to adapt to this fragmented social media market. In November, 17% of all millennials were recorded to participate on the app according to ComScore, which is expected to exponentially grow as it develops. Snapchat is challenging brands by pushing their creative limits to impress their audience and ultimately turn them into loyal fans.

How Marketers and Influencers can use Instagram’s Close Friends feature to their advantage.
0
3515